American Patriots Battle to Save the Nation 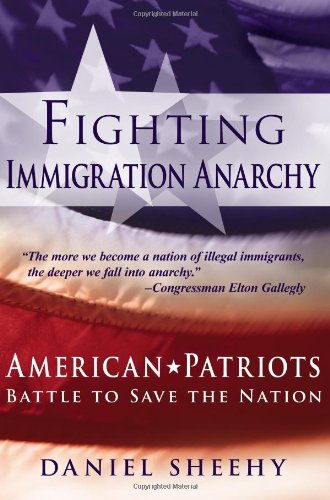 This book is not just informative but inspiring. Readers will want to join up.
Peter Brimelow, author of Alien Nation, editor of VDARE.com

A powerful expose of the treasonous agenda to create the emerging North American Union and the efforts of real Americans to resist it.
Kevin Shannon, host and producer of The Right Source,

This book is fantastic!… It tells you what the mainstream media won’t.
Cheree Calabro, state director,
Indiana Federation for Immigration Reform and Enforcement

Once you start reading it you cannot put it down.
Tim Donnelly, leader,
Minuteman Civil Defense Corps of California

Get this book!
The Ron Smith Show, WBAL-AM, Baltimore

Many will agree that this is the best book written on the subject.
Byron Slater, Border Solution Task Force

This is a great book!
Charles Heller, host and producer of Liberty Watch Radio

Thanks to a few courageous journalists like Daniel Sheehy, we are learning the facts through his book, and the story of American patriots dedicated to saving our nation.
George Putnam, legendary newsman-broadcaster, Cable Radio Network

It is a unique book that chronicles the courage, passion, struggle, and dedication of the leaders in the immigration battle.
The New American magazine

I urge all Americans who care about their freedoms and quality of life to read Sheehy’s book.
Seamus McGowan, Mississippi Federation for Immigration Reform and Enforcement

Sheehy’s book is a witness to history, a tribute to those who battle like Americans to stop the destruction of this nation.
Lupe Moreno, president,
Latino Americans for Immigration Reform

The message throughout Sheehy’s book is that ordinary people with the grit to save the country can do extraordinary things.
Brenda Walker, project director, Immigrations Human Cost

The book is not entirely about what is wrong with America’s immigration policies, but rather about what is right with many patriotic Americans who are standing up to confront these disastrous policies.
Federation for American Immigration Reform (FAIR)